Skotawa, that is current with changes 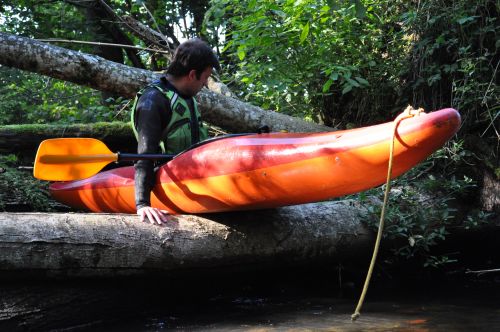 Our original proposal for an alternative trip down Słupa. It includes little known and extremely beautiful and interesting (read: difficult) tributary  of Słupia, that is Skotawa. It is a small river, it runs through the meadows in upper section and the wild forests in lower part. In particular, the lower section is full of numerous trees and stone rapids. After the famous gurricane "Xavier" completing this route without getting out of the kayak is a real challenge. Of course, for this trip we recommend single kayaks. In case of Skotawa a long episode of carrying your kayak in Dębnica Kasubska constitutes a difficulty, but the reward is canoeing along almost pristine stretch of the river to the mouth of Słupia, trhroug the hydroelectric power station Skarszów Dolny. Very few people have had the opportunity totry their chances on this portion of the river, and it is very beautiful. Route of Słupia then continue to the mouth in the Baltic Sea in Ustka. Completing this sections you will face slow current and numerous fallen trees. With a bit of  luck  the final will take place on the beach at the Baltic Sea!

Skotawa is not a water highway - sometimes it requires reflexes and experience. There were the ones who have stared at the beautiful pristine landscape and have suddenly realized that the canoe is speeding three times faster and straight on a fallen tree. It is worth coming here! . Skotawa passes through forests, but in the beginning, from Jawor till the surroundings of village Kotowo, you will come across a meadow.

In this section Skotawę is supplied by two tributaries on the right: Maleniec and Graniczna. Outside the village Jamrzyno, where there is a fish farm, river strongly accelerates. It is varied due to trees lying in the stream, but it is not much of a problem, you can do it without getting out of the kayak (if you are in a single kayak). In the section of Skotawa we offer it as a two-day trip with two episodes of carrying the kayak: the first at the farm in Jamrzyno and the other at the farm in the village of Starnice. Both are a short approx. 10-15 m.